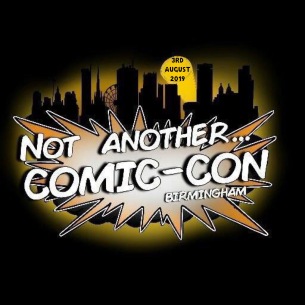 Not Another Comic Con IS Birmingham’s alternative convention. NACC19 is a comic focused event (Yes, there will be comics for sale at a comic con, who would have thought that would be a thing anymore!), and will feature comic creators from every genre. As well as, artists, writers and Indie comic creators. We also have Film, TV and Media guests, TCG Games, Gaming and Cosplay – including a cosplay competition. There will be panels, merchants selling everything your geek heart could hope for, signings, photo opportunities and a raffle with proceeds going to Birmingham Children’s hospital. Be there or be a four sided shape 😉

The convention is a follow up, due to great demand and success from the 2017 event. At the time organiser Peter Burke was a student studying MA Events and Exhibitions Management, the aim was to develop his MA with practise events, by identifying and charting relationships in both fans and that of the comic book convention communities.

This has evolved into Peter now putting on large and small scale events, conventions and signing days up and down the UK. Birmingham is home and where the heart is for Peter and he is aiming for NACC to be a feature in the geek calendar each year.

The planning and piecing together of the next convention is underway and you, the fans, have a major role to play… We want you!

Based on its previous success, the convention is on a much larger scale this time around. It has moved venue to Aston University, in the heart on Birmingham City centre, and the rooms we have are massive. We have a 200 seat auditorium for the panels, the main hall can hold 800 people and the signing room has a 200 person capacity. We are looking for 1000 people minimum to attend across the day, and there is also some great new features. Forbidden Planet International are again the key sponsor for the event, alongside Birmingham’s own Nostalgia & Comics.

There will be panels on diversity in comics, cosplay, comic art and comic writing. These panels will be sponsored by Comicon.com and hosted by writer Olly Macnamee (BleedingCool.com & Comicon.com), and will feature our key guests.

The famous ‘Drink and Draw’ run by artist Simon Myers (Titan Comics) will be our official after party and will be hosted at the Gosta Green pub (Stonegate group) who are sponsoring the convention’s after party.

We will also have the Hi-Vis festival (Graffiti art) making a cameo appearance at the convention and they will be outside doing custom works of art to be donated for a charity raffle to raise funds for Birmingham children’s hospital.

As the weeks and months go by there will be loads of promo events, such as geek quiz, radio, social media and TV, we hope you see the value in this event, as with the 2017 convention, and we look forward to seeing everyone there.